Here we are coming to the end of the second (or is it third – I lose count) lockdown.  Now we go into tier 2.  Always knew there would be tiers before Christmas.

It means that up to 6 people can meet up outdoors but no mixing indoors.  All shops open, Pubs open for meals.  Still the gym will be open and the hairdresser is allowed to open up here  again.  Bistro is opening with social distancing.  It is really all a bit weird and the freeing up of the rules over Christmas will doubtless ensure that the restrictions continue for months longer.  Madness. 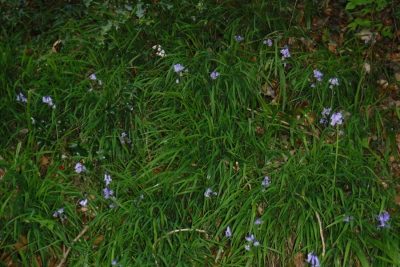 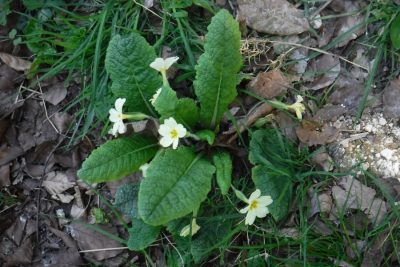 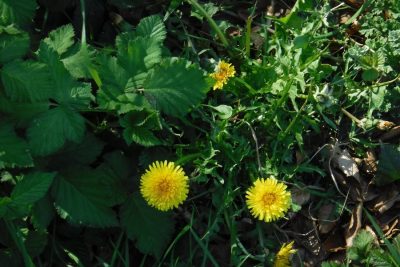 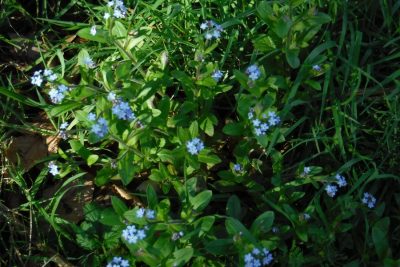 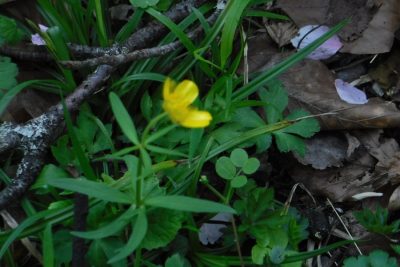 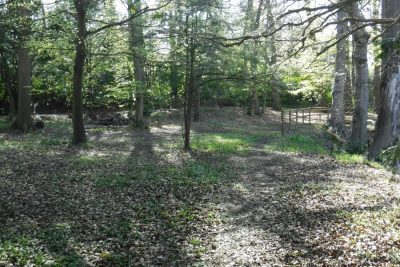 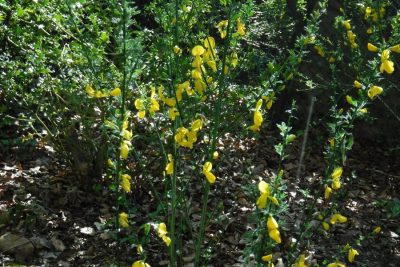 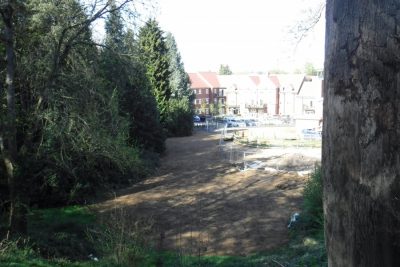 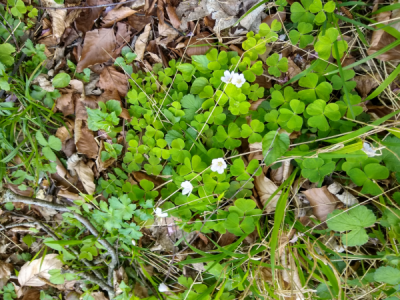 Week four of the coronavirus lockdown.   Spring is definitely in the air and nature goes on oblivious to our troubles.

A selection of wild flowers from the small wood opposite the apartment.

Here we are approaching the end of the third week of lock-down.  Almost certain to be extended for a further period.  The warm spring weather helps a lot  and still taking daily walks to try to keep a bit fit.

Well we have now been on lock-down for a week and everyone seems to be surviving well.  If lunches are ordered from the bistro they are brought to the apartment along with sandwiches for the evening.  Amazing service from a staff already burdened with other extra work.  Not sure how well we will all cope when weeks turn into months.  One problem is shopping with no available slots from any of the suppliers. Waitrose sent an email saying they were giving priority booking for over 70’s but no sign on the website of how to access it yet. The Co-op next door aver very good but only allow one of any item – e.g one orange.

The area of the adjoining “Charles Church” site has been a bit of an eyesore ever since Rutherford House opened. It included the chapel once used by the nuns of the convent who ran the girls school on the site is an interesting building and was shown on the plans to be a Community centre. At last serious work has begun on it, with paving being laid and a footpath. Also the large area used by the builders as their yard and hq is being cleared and levelled. In addition an area of the large sloping green is being set up as a children’s playground.

Because many homeowners will not be here on Christmas Day but will be with friends and family, the staff here arranged for an early Friends and Family event in the bistro.

On 30 November, a party for our first anniversary. Five apartments moved in on 27 November 2018 amid armies of men in hi-vis and hard hats and construction vehicles everywhere. It was a good party with virtually a full turn-out of the now 31 occupants (homeowners). Wine, cheese and sandwiches and a huge birthday cake. Well done to Mark and the team. It now begins to feel like a community.

Early on M&S agreed to provide a back gate to give a short-cut to the shops through the adjoining estate. A gate was duly fitted with a lock and we were all issued with keys. However, keys proved unnecessary as it was possible to open it with the handle from either side. This route soon proved popular with local people and it was agreed to make the gate automatic with fob operation.

After a long delay funding was approved and eventually some guys arrived to install the necessary underground conduits. Another delay of several weeks and more men arrived to install the closing mechanism. This was a week ago and still the gate is not fully operational. Welcome to M&S time. It wil be good when it is done though – doubtless “next week”.

On one of the hottest August days on record, the staff laid on a wonderful barbecue for homeowners and guests. There was an excellent spread of sausages, burgers, ribs etc and an array of salads with all colours of wine and juices. And the chef’s apple pie is a world beater. Well done to Mark, Colin and all the staff.

One thing to be said about McCarthy and Stone is they don’t rush into things. And in their speak “next week” is a synonymous with “At some indeterminate time in the future”.

At move-in there were metal gates at the entrance to the drive. These had been seriously damaged by construction vehicles. After some weeks they were replaced. We were told they would be automatic and would open on the approach of a vehicle. However the activation unit would be installed “next week”. Several weeks later two guys arrived an installed some wiring followed after further delay but two guys who attached something to the gates themselves.

However there was still no sign of the gate actually being capable of movement. A man arrived, spent some time looking at them and talking on his mobile phone but eventually went away with the gates still immobile.

Finally, after further weeks, guys arrived and the gates were seen actually opening and closing of their own volition. However, not the end of the story. An incoming vehicle narrowly avoided crashing into them and outgoing vehicles were nearly hit by the opening gates if they stopped too close to them. More delay and someone arrived to put black and yellow stripes on top of the gates to deal with the first problem. The solution to the second is apparently a white line on the road indicating the safe place for cars to wait for the gates to open.

Finally, eight months after move-in, the gates are now working.

Went to a McCarthy and Stone “Event”organised by the Sales and Marketing team. It must qualify as the event from hell. It consisted of a chap dispensing fairly tasteless cocktails which was ok if you like watery alcohol with a slice of strawberry and sprig of mint floating in it. However when he had what he considered enough of an audience he launched into a patter telling us how to mix cocktails, all with a lot of phoney science and jokes – much emphasis on the Porn Star Martini which obviously fascinated him. He said at one point that his normal audience was Hen Parties and I guess if they were already sufficiently drunk they might have appreciated it. Fortunately he paused for refreshments and it was just possible to make an escape. Phew! 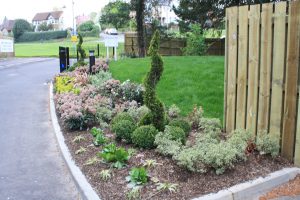 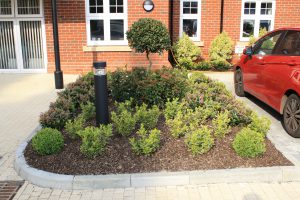 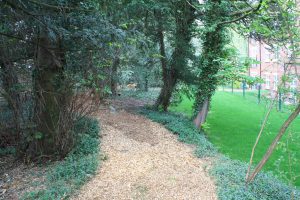 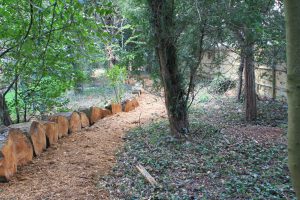 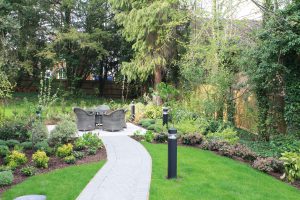 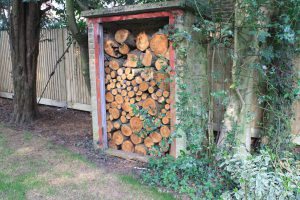 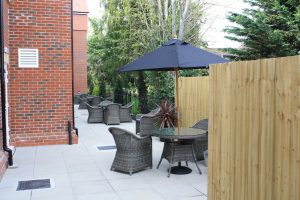 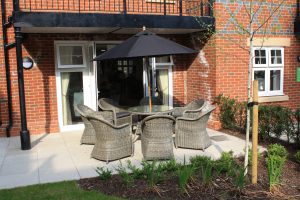 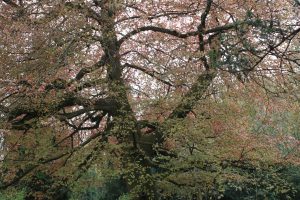 During a brief spell of snow in February the building and Gold Hill common were transformed. 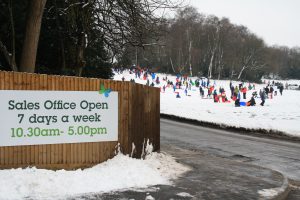 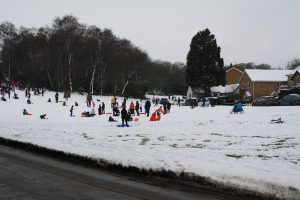 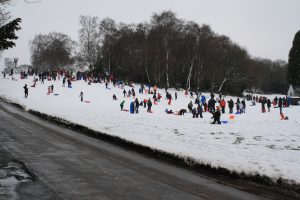 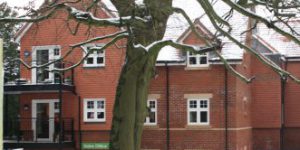 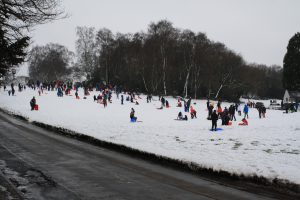 27 November 2018 – Five apartments attempting to move in on the same day – and the building still far from finished.  And pouring with rain. Absolute chaos.

A visit to the building site in September 2018. Still a long way to go. 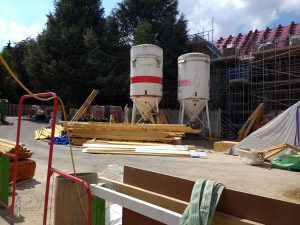 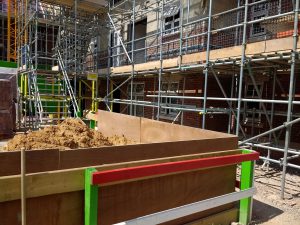 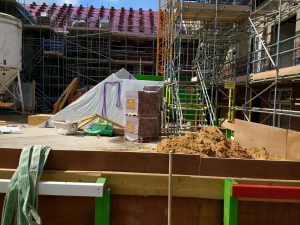